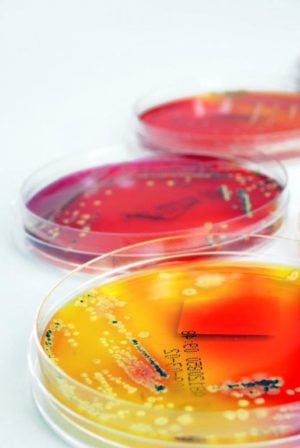 If you’re not a microbiologist and you have to deal with microbiology reports to do your job, you might feel you are bogged down a little with a lot of jargon including TVC, ACC and APC, but what’s the difference? Here are just a few definitions of those acronyms we love to use at Express Micro Science!

First off cfu – this stands for colony forming units. You might think we would just say bacteria, but that would be slightly misleading as all the bacteria in your sample may not be able to form its own colony of offspring. Colonies, are what we can see on the plate – a single bacteria we cannot. For trending and reporting your results to others use cfu, to look smart, but realise it is pretty much the number of single bacteria which were in a (g) which stands for gram of your product.

Next one:  One of the most common tests is the number of aerobic bacteria (those bacteria who multiply in the presence of oxygen) and who grow best at 30C. Different labs have different acronyms for this group of bacteria. Here at Express Micro Science we use TVC (total viable count) but other common terms are APC (aerobic plate count) and ACC (aerobic colony count).

They are all reporting on pretty much the same thing, the TVC term (Total Viable Count) comes from the principle explained in the second paragraph. That only bacteria capable of forming colonies (or viable enough to form a colony) are being reported.

ACC is short for aerobic colony count, so incorporates both criteria that the bacteria being reported grow in the presence of oxygen and are capable of forming colonies.

The APC term stands for aerobic plate count, but again is interchangeable with the others.

Other terms used more historically are Standard Plate Count, Mesophilic Count or Total Plate Count these too generally refer to aerobic bacteria able to grow at average temperatures (e.g. 30 to 40°C). The exact temperature used by the lab should always be stated within the final report (e.g. TVC @ 30°C, or ACC @ 37°C, etc.).

I hope that helps, if you have any further questions feel free to give the lab a call to discuss.